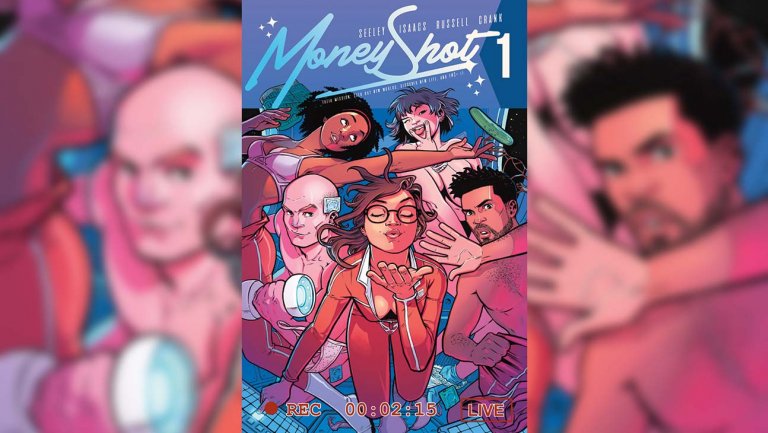 But here’s the thing guys:

It just kind of…

What I mean to say is…

And at that, really, really well.

Writers Tim Seeley and Sarah Beattie have taken a premise that might have worked well enough on its own, however juvenile, and turned it into something truly adult. The opening splash page of issue one should be enough to sum up the series for most readers, and for the more sexually conservative of the reading public, this might well be as far as they ever get. Call it a spoiler, but the suggestive image of a woman in an unzipped jumpsuit with the oddly suggestive—but perhaps not—name of “Coyle” embroidered on her requisite name tag, telling an unseen but not undescribed “fish man” that she, to use a passive verb here and shame the Devil, wants to be fucked by him. Add to that the suggestive angle of a certain robot camera’s right wing (did I say right wing? Yeah, they’re gonna love hating this book) and you’ve got just the kind of thing that would have kept me up nights in those awkward puberty years. The writing, overall, is excellent, and the Seeley/Beattie combo have done a wonderful job of plausibly explaining why a group of research scientists would resort to fettered and unfettered sexual escapades in the vast reaches of outer space instead of sitting on their thumbs in a laboratory writing six hundred page grant proposals. The quippy dialog and one offs from the characters, not to mention their stellar pornstar names—one of them calls himself Super Massive Blackhole, for chrissakes—only further help to drive home the undercurrent of hilarity that belies the titillating exterior of this inarguably sordid tale, which is perfectly described by Rebekah Isaac’s (Buffy The Vampire Slayer) lusciously clean line work and Kurt Michael Russell’s (Hack/Slash) sultry color palette.

In all honesty, I don’t know that this book could have been as successful with a more textural artist at the helm. Isaacs’s figures are clean lined and realistic enough not to be mistaken for cartoons, while at the same time avoiding some of the more clinical looking traps that result in a twenty four page WikiHow article. While I’m sure some of the responsibility lies in the script itself, Isaacs’s discretion in shot choice is on point. She remains unerringly suggestive without crossing any of the boundaries that had me wondering just how in the hell they were going to pull off a premise like this and keep it within the there but largely unspoken realm of “decency” that exists in the wake of the dissolution of the old Comics Code Authority. It gives me some hope for the future that some of my readers may not know what the CCA is or was apart from its footnote in the comics history books, but suffice it to say, while both story and art will certainly be construed by some as offensive, it is not universally offensive at a level that might find it wrapped in black plastic in the back row of magazines at your local 7-11. Moreover, for those interested in full frontal nudity in their comics—not saying I am; not saying I’m not—this one dials into a visual territory that is several degrees of measure below Skinemax or even HBO. I suppose I must register surprise here, because—and this is going to sound snotty, beware—I was initially curious to read this title based solely on the loglines I had read in Vault’s social media posts, but ended up enjoying the characters and story on a level tantamount to some of my current favorite series, which would include things like Christopher Sebela’s Crowded (Image), itself wonderfully drawn by Ro Stein and inked by Ted Brandt.

In all, Money Shot delivers on both premise and promise in ways wholly surprising and unlooked for. Whatever your kink, or lack thereof, there is something in here for pretty much everybody. History buffs will love the wonderfully concise history in and of the buff and its place in adult entertainment. I actually walked away from this comic feeling like I had learned something, which isn’t a sentiment I can ascribe to pornography outside its relation of the mechanical nuances of, well, relations. Add to that the various scifi and comedic elements and what emerges is a well rounded comic book experience couched in a sort of Stone Soup with porn being the central thematic element. What surrounds it though is plenty of heart, and plenty of head (pun very much intended again, guys).

Eschewing the regular 10 Scale for rating, I’m going to bump this one up to a perfect 69. I’ll be looking forward to issue three with no small amount of prurient interest. Money Shot is money well shot, in this humble reviewer’s opinion.

(Word to the wise, gentlemen, don’t read this one standing up.)

Order from your LCS or BookIt on Vault.com

« Huey #VS Stewie
Harry Potter #VS She Said Destroy »