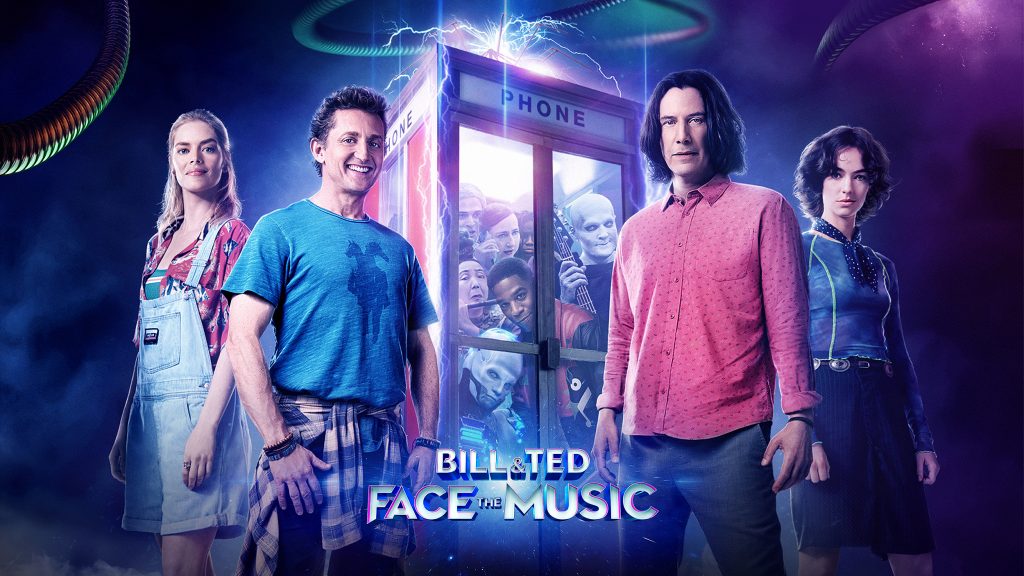 Bill & Ted Face the Music (FTM) rocks my face off. Seriously. I first saw the original Excellent Adventure (EA) swimming in my older cousin’s pool. He explained the premise to me as these two future “rock-messiahs” using time travel to pass their history final. My cousin always had a way with words and I was hooked from the beginning. When Pizza Hut gave out copies of Bogus Journey (BJ) as part of a promotion, I ate more Pizza Hut pies than a kid on Book it! In addition to memorizing the movies, I read every comic book run from the Marvel classics up to today’s releases, like Bill & Ted Go To Hell, which was the original title for Bogus Journey. I know Bill and Ted. I grew up with these guys. For better or worse, wanted to be them. I wanted to join Wyld Stallyn.

2020 sucks most heinously. There’s no way getting around it.Thus far, it’s a year with little to celebrate, especially in the way of movies. I won’t see a movie in a theatre again any time soon, but if FTM had been in theatres in the old world, I would’ve arrived opening night, no question. My love for Bill & Ted guaranteed my attendance no matter how the film turned out. So it wasn’t a surprise I watched the movie the first weekend it was available. 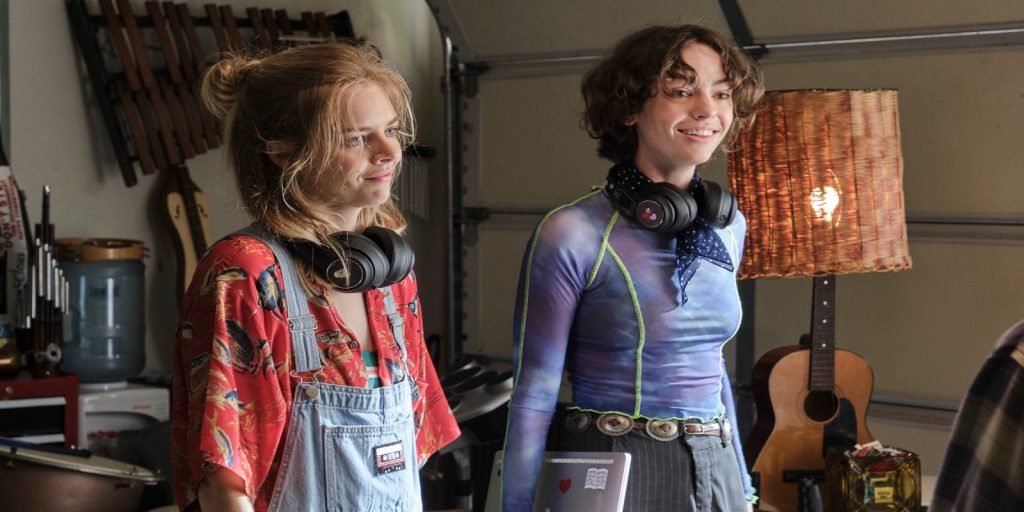 Right away, the Bill & Ted continuity is there, the love for the originals is there. From the opening wedding scene where the beloved, yet flaky, Missy chose yet another husband which isn’t Bill or Ted. Who she weds is hysterical, but I wondered why there wasn’t a call back to Missy marrying the villain from BJ, Chuck De Nomolos. De Nomolos was set to marry Missy next, per the end credits newspaper montage in BJ. The comics carried on the story with them as a couple. Shouldn’t the bald geezer have received a cameo as a wedding guest? Crying off in a corner, sad and bitter over his lost love?

We immediately learn Bill and Ted became rock stars in the last twenty-five years but now their fame is a distant memory. They still believe they have a destiny to unite the world and create a bright future through music, but have no idea how. Much like the opening in the original film, Bill and Ted hash out their worries in the garage. In EA, we met the rockers discussing how they’d get Eddie Van Halen for their band, with Ted feeling pessimistic regarding their chances. Ted’s pessimism returns full circle, as he tells Bill he’s giving up music and quitting. Most heinous! Ted’s pessimism is interrupted by an arrival from the future. I knew going in to FTM I would miss George Carlin most fiercely, but meeting Rufus’ daughter, who tells them they must travel through time once again, was a good callback.

It’s another adventure for Bill and Ted, only this time, all of reality is at stake. Whoa, you serious, dude? Ok….

Overall, daughters are a major theme in FTM. While it was awesome seeing Bill and Ted again, it’s their daughters, Billie and Teddie, who steal the show and I predict will carry the franchise forward. If comic-cons were still a thing, I wonder how many cosplays we’d see of these two? Samara Weaving and Brigette Lundy-Paine delivered most extraordinary performances as 24-year-olds still living at home without any real goals besides playing music and putting together sounds they like.

While Bill and Ted spend most of the film trying to take a song from themselves, Billie and Teddie time travel to help the Dads assemble an extraordinary band for a final show to unite the cosmos. Billie and Teddie’s scenes contain EA feels as they meet historical figures like the guys did in the first film. Mozart, Louis Armstrong, Jimi Hendrix and more come along for the wild ride through time. The theme behind their band was inspiration. Each musician recruited had inspired the one who came onboard before. Also worth noting every musician in their band, aside from Mozart, was a POC. Noteworthy and appropriate considering the undervalued contributions made by marginalized groups to music.

What I loved about the movie was how well it kept to continuity; servicing fans (giggity) of the original while moving the story forward. There’s most definitely room to continue A Bill & Ted franchise without Bill & Ted. Let’s face it, they’re not getting any younger. Like Rufus said: the clock in San Dimas never stops running. Despite the two main stars aging, the story left me satisfied with their conclusion. I’m still losing sleep over the Star Wars sequel trilogy NEVER showing the big three characters– Luke, Han and Leia– at the same time in one movie, not even for a single scene. Many blame Disney’s most heinous decisions on pushing new stars instead of relying on the old. To that most atypical response, I submit FTM as evidence you can satisfy fans of the original and build a new franchise at the same time. From a certain point of view, FTA built a stronger basis for an ongoing franchise in one film than the sequel trilogy did with Rey, Finn and Poe in three films (to say nothing of the ignored/forgotten Rose!)

While many felt the ST also lacked strong pay-offs, FTM delivers. In the end, Bill & Ted fulfill their ultimate destiny and unite the cosmos through music. We witnessed the two iconic rockers rip out a final performance on their trademark guitars (Bill plays a Gibson SG and Ted plays a Gibson flying-v, FYI). FYI, I loved Ted’s guitar strap in the final scene, covered with the same smiley faces he wore on the back of his hooded jacket in BJ. Their final solo brought tears to my eyes, flowing most excellently down my nostalgia-pinked cheeks. Would it have been so hard for any of the three Star Wars trilogy movies to deliver a moment like that with the Big 3 characters? 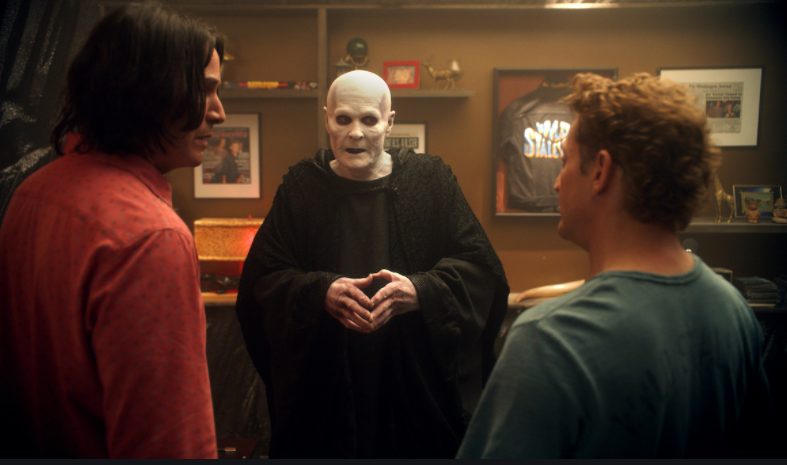 Speaking of most triumphant character returns, how about William Sadler as Death? I popped out loud when he made his first appearance onscreen. His scene with Bill and Ted in Hell, dealing with years of hurt and negativity between them, was a high point in the film. It showed that longterm relationships can carry serious baggage, familiarity breeds contempt and things don’t always turn out the way you planned. Carrying the theme of passing the torch and moving forward, it took Billie and Teddie to patch up Dad and Death’s old wounds. They reminded Death that Wyld Stallyn was about the music and the joy it brought to others, much like the Bill & Ted franchise itself. Another shout-out goes to Hal Landon Jr., returning as Chief Logan, better known as Ted’s Dad. Chief Logan hit me right in the feels when he finally supported his son’s dreams, believed in him and vowed to help him instead of hinder him. Another most excellent pay-off to conclude Bill and Ted’s story before new ones continue.

Watching FTM, it felt like a done deal that this franchise will make like Journey and carry on. There are some most-key indicators this is so. For instance, the new killer robot, Dennis (sorry, not using your whole name, dude) clearly has a major backstory we didn’t see. To the keen-eyed viewer, it’s most obvious they’re setting him up to be the new Death. The rest of the band could return easily as well. EA was guilty of bringing in historical figures but doing little to develop them besides mispronouncing their names. FTM succeeded in building likable and relatable historical figures which you cheered for even if you didn’t speak their language. The band went backstage through the streams of time at the end of FTM, but I think they will be coaxed out for an encore.

So, have you seen the movie yet? What did you think? Will the series carry on with Billie and Teddie going on adventures through time with their most extraordinary band?

Bill & Ted shreds most bodacious as a completion to the original franchise and the start of more adventures- 10/10 Gibson Guitars! 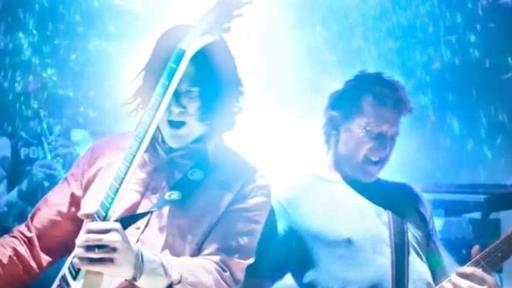