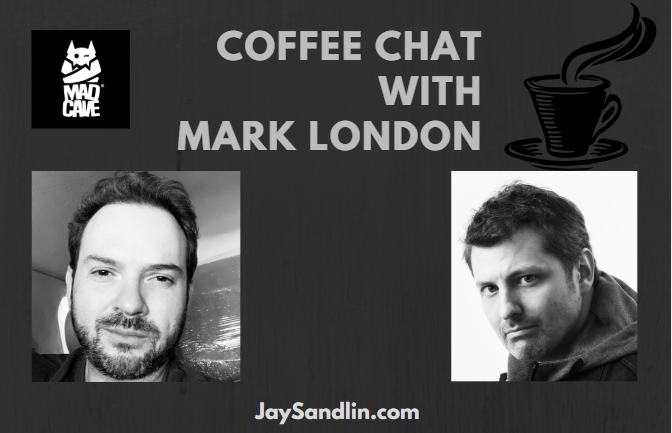 Madcave CEO and writer, Mark London, was kind enough to join me in Shortlandia’s Coffee House, aka the leftmost corner of the shed, for an interview about his comics and the future of Mad Cave Studios.

I shifted in my seat with excitement, really looking forward to this sit down with Mark. His latest comics are on fire: Knights of the Golden Sun, Honor & Curse, and, of course, Battlecats Vol 2 coming in less than a month. I already reviewed the book, now I looked forward to talking to the writer behind it.

I took a sip of my coffee, then remembered I hate coffee. I poured some water from the Shortlandia community tap for the remainder of the interview. Wiping my mouth with a shortlandia napkin, my sleeve, before asking, “Mark, what’s the first comic you remember reading?”

Mark smiled, his eyes drifting up to the left. It didn’t take an attosecond before he said, “Silver surfer 53. I gravitated towards that cover faster than a speeding bullet. I mean, Norrin Radd looking crazy and saying “Death to the Emperor!”? Come on, I had to give them my money!” 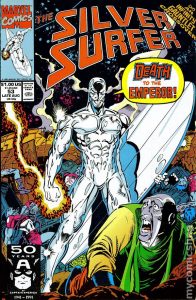 I laughed, remembering fond memories of the Silver Surfer cartoon on Fox. Why did they ever cancel that show? “Yeah, individual issues are great. But what’s the first comic series you really remember binging?”

Not missing a beat, Mark slapped his palm on the table, “I stuck with The Silver Surfer for a while. I’m not just saying this because there is a big movie coming out in a few weeks, but coincidentally it was The Infinity Gauntlet.“

Inhaling deep, I waved my hands, “You don’t have to explain, many people get hooked on comics for life after IF as their first taste. It was the first time Thanos snapped! I think Jim Starlin was incredible for the work he did for comics there.” I took another sip of my non-caffeinated beverage before asking, “Who are your biggest influences in comics? Artists and writers, if you please…”

Mark leaned back, smiling, “Well, because you ask so nicely, my writing trinity is Morrison, Moore, and Gaiman. Those were the guys who really made an impact on my life back in the day. From the current writers, I like Geoff Jones, Mark Millar, Vaughn, Remender, Bendis, and Tom King. In the art department, I have to go with George Perez, Neil Adams, Mike Mignola, and Sam Keith. Some other guys that have captured my imagination over the years are Tradd Moore, Matteo Scalera, Dragotta, Geoff Shaw, and Daniel Warren Johnson. Special Mention to Jim Lee.”

At this point, I put down my drink, choosing my words carefully, focusing my full attention on the next question. “Those are some serious names, with serious stories. But let’s talk about your writing. What’s the first serious story you remember writing?” 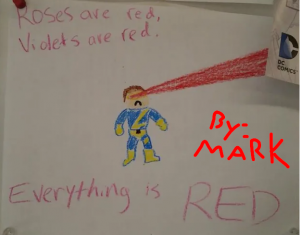 Mark tapped his fingers on the splintery table, probably wondering if my shed met the same health codes of the coffee houses he usually patronized (it doesn’t). “When I was in sixth grade, we had a writing competition in English class. I asked my teacher if I could write a story involving the X-Men. I don’t think she had any idea who or what the X-Men were, but she agreed. It was only supposed to be a five page, double spaced, short story. Well, I ended up writing my little heart out and pumped out 30 single-spaced pages!”

We both laugh, fists pounding the table. Then the table collapsed faster than the Avengers in a Civil War. Embarrassed, I shout for the Lepersquatch sitting two tables down to clear out, eat his Lucky Charms elsewhere, so we can move the conversation along.

After a few minutes of getting resettled we continue the chat. “You came out of the gate with a strong set of titles for Mad Cave. How long did you spend developing each story from start to print? Feel free to give specifics on titles and dates.”

Mark wiped spilled coffee off his shirt from the previous table disassembly, carrying on graciously. “Midnight Task Force was created almost ten years ago as a screenplay. I got together with one of my buddies at Boston University and we wanted to make an indie film. I wrote the whole thing but unfortunately, the project never came to fruition. A few years passed and eventually, I started contemplating the idea of Mad Cave. So, once Mad Cave was established, I adapted it into a comic book format. Once the first draft of Midnight was complete, I started to put pen to paper and began work on Battlecats and the world of Valderia. After Midnight and Battlecats were well into production, I felt that we needed two more titles in order to have a strong line-up and be able to compete in the market. You might have heard of those two titles by now, Knights of the Golden Sun, our angels and demons story of biblical proportions; and Honor and Curse, a story that takes place in feudal Japan and follows a tormented shinobi who struggles with an ancient evil he has inside.”

A stray cat walked by the front counter, meowing in anger at our inflated milk prices, reminding me of another important question, “Let’s talk Battlecats. Big question: Why cats as the main characters?”

Mark put down his drink. I know the cats mean a lot to him, this must be one he’d been waiting for. “I get that question a lot. Well, I find cats to be fascinating creatures. They are beautiful to look at, you can’t deny it even if they are not your thing. They are mysterious, smart, and they make you work for their affection, I respect that. Man, even the Egyptians way back in the day were captivated by them and treated them as superior beings. When I starting thinking about Mad Cave, I knew that I wanted one of the initial concepts to be about a cast of cats, but I wanted them to have somewhat human aesthetics that so the reader (on a subconscious level) could still relate to the characters.”

I wheeled around in my seat to check the clock on the wall, then remembered Shortlandia can’t afford clocks. But judging by the location of the sun through the holes in the ceiling, it was probably time to wrap things up. Mark had places to go, more comics to write. “Thanks for your time, Mark. For my last question, gaze in your crystal ball and tell everyone what you see in Mad Cave’s future. Do you see the brand expanding in addition to graphic novels and into other mediums of storytelling? If so, what?”

Mark looked up as he counted on his fingers, “Right now, we are only focused on proving ourselves in the comic book market by creating fun, action-packed comics across a variety of genres. This has become Mad Cave’s obsession since we joined up with Diamond Distribution. But I won’t lie, we dream big at Mad Cave. Having these properties transcend the medium would be surreal. If I would have to pick one to make the leap first, it would have to be Battlecats as a Saturday morning cartoon. I also think Knights of the Golden Sun and Honor and Curse would work as an animated series. Midnight Task Force would be perfect as a mature, live-action series. Hey, all of this is hypothetical and this poor creator can dream, right? 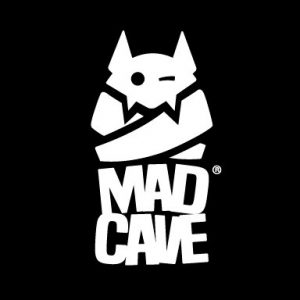 Mark stood up to leave, but I couldn’t let him out of Shortlandia on such a cryptic note. “Wait, Mark!” He looked over his shoulder as I stood, speaking rapidly, “I know there has to be more to it than that. What does Mad Cave have planned for the future?”

Mark shook his finger with a sly smile, then plopped a few loonies on the table as a tip for the waitress who never refilled his drink. Alone, I ordered another coffee before spitting it out again after the first sip, knowing more answers to this question lie in wait for the future. I can’t wait to find out.

If you want to keep track of Mad Cave and their future plans, check them out here: MadCaveStudios.com

Mark’s appearance on #WhatHappensNext, Part 1 is available here with Part 2 dropping on this website and podcast outlets everywhere TOMORROW!