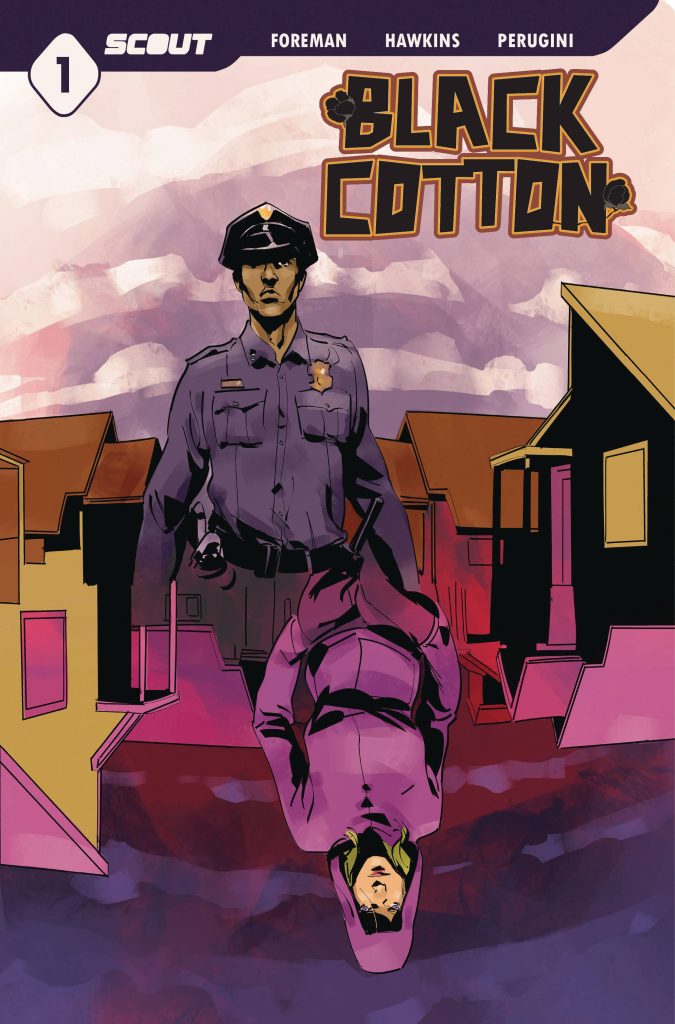 “Set in an alternate reality where the social order of “white” and “black” is reversed, an elitist family, the Cottons, are rocked by a tragic shooting that begins to unravel long standing family secrets that could not only destroy the family but also divide the fragile social climate of the world.”

Black Cotton feels like Jordan Peele’s next hit movie in comic form– a reverse Trayvon Martin story set in a world where the “White Lives Matter” crowd possess legitimate gripes. Artist Marco Perugini delivered heavy inks in the black and white pages, which I personally feel was the best way to go. The black and white inks provided the same realistic, gritty, feel of some of my other favorite B&W comics, such as Punk Rock Jesus. 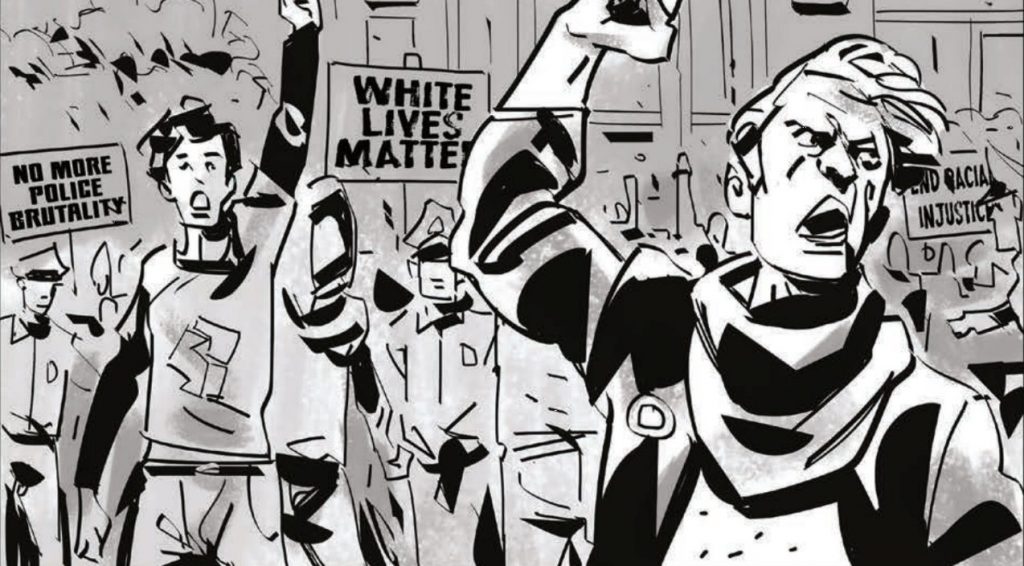 Black and white art in a story filled with shades of gray.

Writers/creators Patrick Foreman and Brian Hawkins clearly took a look at the world of social unrest and systematic racism in policing and did a 180. The best story pitches come in the form of questions– that’s a tip, write it down. Finished? Okay. When a writer is planning a short, elevator, pitch for their story, a strong technique is to begin by asking “What if…” or “Wouldn’t it be cool if…” Some examples of this include Ridley Scott’s original Alien treatment, which he pitched as, “What if we did Jaws, but in space?” Similarly, Gene Roddenberry pitched Star Trek as, “Wouldn’t it be cool to do Wagon Train set in the stars?” For Black Cotton, the creators took the Killmonger approach and asked, “What if the social order of “Black” and “White reversed?” 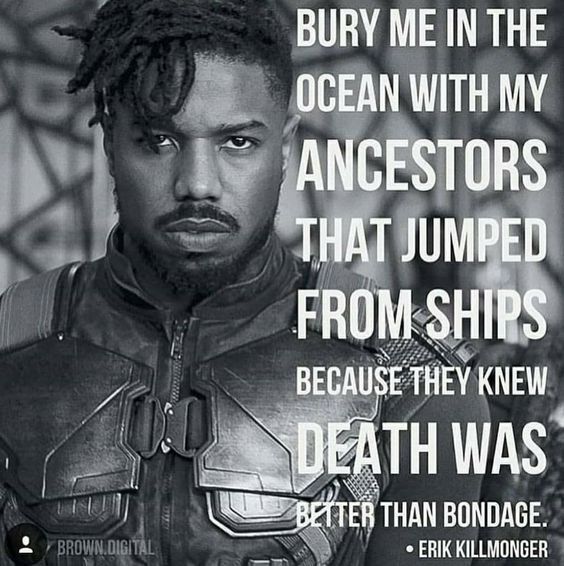 The writers do an excellent job of dropping into the world. I imagine there could be a complex series Bible with many pages of flashback and historical context as to how the world came to be this way. As a History major, I’m asking many questions after reading the first issue. How did Blacks get on top in America? Did the slave trade still occur? At what point in the timeline did events deviate to lead to an America where whites are the oppressed, over-policed, minority? The book doesn’t answer these questions in the first issue, which is a positive. Instead, the reader is dropped headfirst into a modern day Virginia where an officer shoots an unarmed white woman walking down the street wearing a hoodie. Had she already eaten her Skittles? 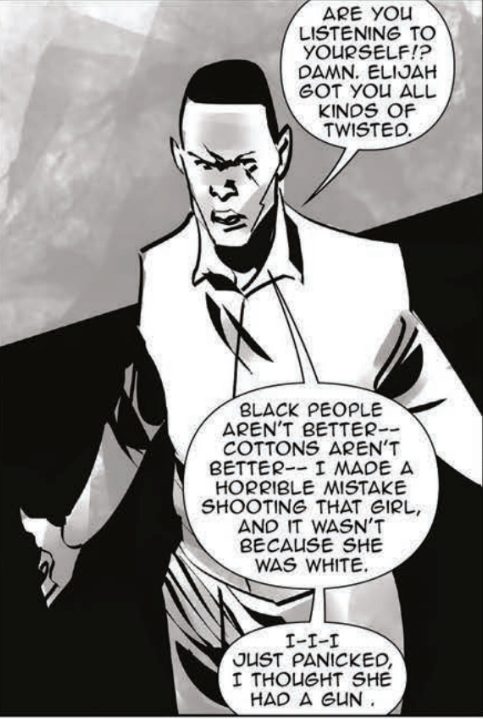 Another real life story the opening sequence reminded me of was the female police officer who went to the wrong apartment, walked inside, and shot the tenant on his own couch while he was eating ice cream. (ABC News- Amber Guyger)

The story grows more compelling as the reader learns the cop responsible for the shooting is actually a member of an extremely wealthy and powerful family, the Cottons. Early on, the Cotton family gives me a feeling somewhere between a Corleone crime family and the Trumps. Like most powerful people, they fear losing their power. One aspect of the art and storytelling which went well together were the white protestors after the shooting. Perugini kept this simple and direct, crowds standing and peacefully holding signs. Foreman and Hawkins kept the messages on the sign, likewise, simple and direct, but with phrases we’d normally associate with racism and inequality in our world, such as: white lives matter, no black privelege, etc. Other signs, however, are directly lifted from real life BLM protests, calling to end police brutality.

I won’t give any spoilers as to where the story goes but the first issue does a great job of dropping the reader into the story, providing less to make you want more and give you a glimpse at some of the key characters. Zamora’s lettering is top-notch in that I hardly noticed it and the flow of balloons were seamless, guiding my eyes from bubble to bubble with little hesitation or confusion, top notch! Officer Cotton in particular interests me, as he seems to show little to no remorse after the shooting, even playing on his cell phone as he goes to the hospital to visit the victim. His excuse for the shooting, “I thought she had a gun, I panicked”, is a worn, tired, cliché in real life law enforcement when officers unleash violence on minority suspects. Black Cotton, however, puts the cliché in a very new light by reversing the roles and racial hierarchy in this world. I can’t wait to explore more!

10/10 for presenting an alternate universe of social upheaval turned on its head. 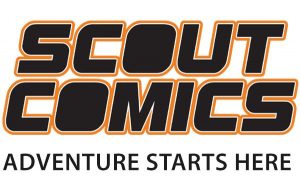 Scout Comics already has a line of apparel and gear based on Black Cotton available to order: HERE