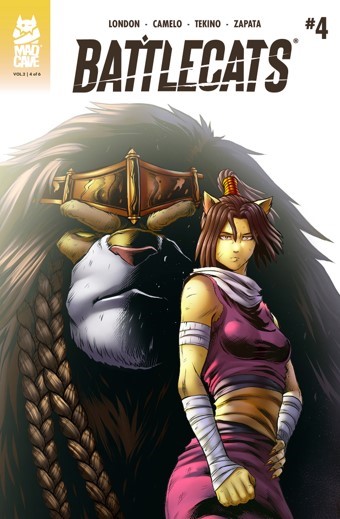 Mad Cave Studios continues the sequel volume to its flagship book, Battlecats, as the battle for Valderia continues in issue #4:

Inside Cover: “The Darkat’s march of terror continued through Greenspyre, as they took the city of Meerion and are now one step closer to their ultimate destination. Artain and King Eramad reflected on Artain’s journey from isolation to living amongst the felines of Valderia. Finally, the Battlecats were introduced to their second trial; a fight to the death against ravenous prisoners struggling for their freedom…” 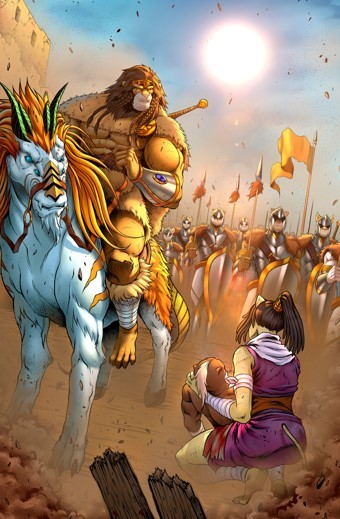 Mark London’s medieval fantasy comic,  featuring felines in a sword and sorcery epic, always manages to stay on its feet– even when some of my favorite characters aren’t featured on the panel. Without giving too much away, the war for Valderia is on, but the Battlecats remain locked in combat trials to prove their worth to the Lionborne, King Eramad III. As the bloody trials continue, they become increasingly weary, with one of their number becoming gravely injured. Even noble Kelthan’s (my favorite character) faith in the throne seems to be wavering as the trials seem to go on without end. 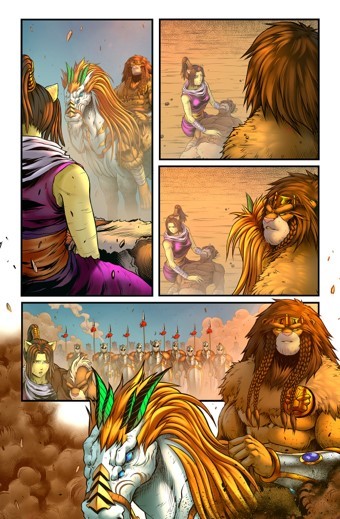 London seamlessly weaves storytelling from previous time periods into this issue without it feeling overstuffed or confusing, though I do sometimes wish for a handy Valderia glossary or reference guide to keep up with the various cats and their factions. The religion of the Battlecats world also interests me, as followers of the Lion God and Lizard God seem to compete with ideologies far deadlier than door-to-door Jehovah’s Witnesses. I look forward to more expanded information on the world of Valderia in the future. 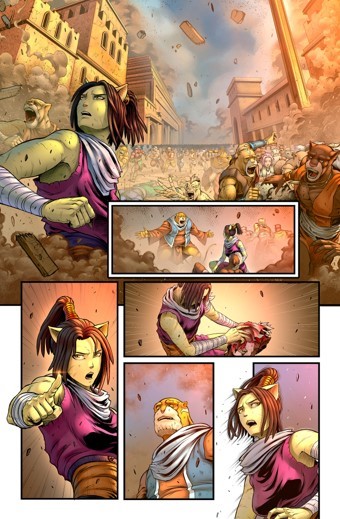 The high-quality artwork is what I’ve come to expect from the team; the coloring is vibrant and the lettering always keeps the story flowing faster than molten rivers on Mustafar. The highlight of this book for me was a sequence years back featuring King Eramad proving his mettle against an uprising from Umbra raiders. The intense battle sequences and medieval action set in a world of magic consistently deliver and remind me why Battlecats is Mad Cave’s flagship title.

The war for Valderia isn’t over, I look forward to the remaining issues of Volume 2, especially after the cliffhanger invite in this issue, 10/10 for the best war for the Pridelands this year.