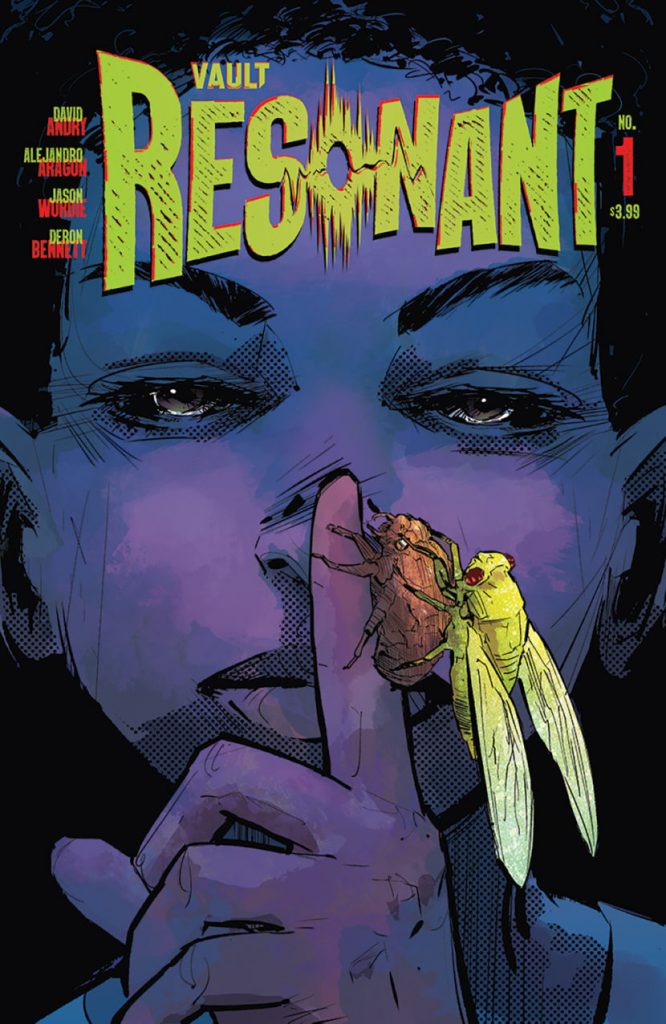 There is an tendency among so called “end of the world” stories to over explain or oversell the unique features of an author’s particular vision of a dystopian hellscape. For starters, not all of them are all that hellish, so pains are taken to show why this seemingly normal world isn’t as seemly or  normal as one might think. I don’t like to think that any writer is attempting to condescend to a lower intelligence, and while there are plenty of examples out there of stories which  might test that belief, “Resonant,” by David Andry is most certainly not one of them.

The story begins, really, with the cover; an unusual occurrence these days, though a welcome one where this book is concerned. Two flies copulating on the end of a shush finger, and a face cast in deep purple letting us know right away, if form holds true,  someone is going to die. Turning the cover over, that sickly sense of foreboding invoked by the cover gives way to sunny days, smiles and blue skies as a young girl—presumably our protagonist—plants a seed in the coppery earth. The look that artist Alejandro Aragon is going for in this book is immediately apparent from the first page, if not the cover itself. Personally, I’m not the biggest fan of comparators that operate on the “so and so meets such and such” template, but all the same, Aragon’s art—on this first page and throughout—is deeply reminiscent of the textured work of Mitch Gerads (MISTER MIRACLE, Sheriff Of Babylon) and Scottie Young (Wizard of Oz). Realistic figures are given a youthful sort of verve that adds beautifully to the growing kinetics of Andry’s narrative. We are in a world that has  ended, as it turns out, but how,  why and to what level of severity things have escalated, we are shown rather than told. We’re introduced to a young girl, Rebecca, who has had the lower half of her left leg amputated for reasons unknown. She lives in a cabin in the woods with her father (as yet, unnamed), and two brothers; Ty and Stef. Life seems pretty good for these guys, as post-apocalyptic cribs go. The cabin doesn’t appear to be much until we are introduced to the family panic room, which looks for all intents and purposes like the ER of a small hospital. In this world which  has ended, we learn  we are to be afraid of “waves,” and  so called “chirpers” act almost as a form of currency in their ability to detect and predict oncoming waves so  survivors can enter an apparent meditative state of prayer to keep on surviving. Now, what travels in waves? Light? Sound? Water? Fire? It both is and is not a spoiler to say  this first issue-well, it doesn’t really say, and that goes back to what I said earlier about pacing. Rather than weaponizing subtext as a cudgel to bash in our brains with backstory, Andry eschews subtext altogether to give us something infinitely more divine: CONTEXT. 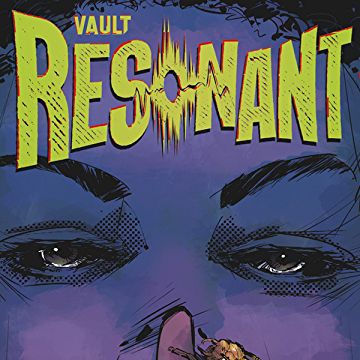 “Resonant” resonates with alarming context. We are assured  there are still trees and people when the world gives up the ghost, but there are still scary looking homeless addicts. Children still play in the woods, and parents still make questionable decisions to act upon their perceptions of the perpetual dangling carrot of  The Greater Good. For anyone who has watched any of the critically acclaimed Game of Thrones TV show on HBO, you’ll know  breaking apart the tight knit family unit is a recipe for prolonged tragedy and disaster. This may be more of a Pavlovian response on my part, meaning some of the dread I culled from these pages is a conditional response to other stories I have read or watched. But the rules of this story so far, rules which allowed a prepubescent girl to lose half a leg, rules which  allowed for the world as we know it to end, would also seem to enforce my belief  the central actions of the primary characters in this first chapter are going to have some pretty serious consequences down the road. The whole issue builds like a seven point earthquake and leaves the readers, much like the characters themselves, caught in that moment of crescendo as the wave crashes, perchance to recede.

For fans of post-apocalyptic fiction, this is another worthy entry to the canon of eschatological literature. Throughout, I was reminded, however vaguely, of Darcy Van Poelgeest and Ian Bertram’s “Little Bird,” which kicked off earlier this year. In terms of story and approach, the books could scarcely be any different from each other than they already are, however, both of them make the kind assumption that their readers are intelligent people capable of asking the right questions and cultivating their own correct answers from the narrative as it unfolds. “Resonant” leaves the reader with many such questions, foremost among them the amnesiac’s own trifecta: What has happened? What is happening? What will happen?

Guess we’ll have to find out next month, won’t we?

Find Resonant from Vault Comics on their website, here. Ask your LCS to order!