Knights of the Golden Sun…Continues!

KNIGHTS OF THE GOLDEN SUN RETURNS! 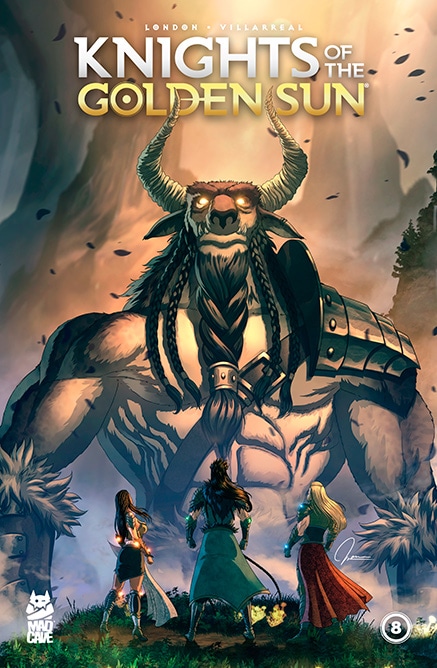 Website Description: “The Archangels are back! With Metatron on the run, and Lucifer nowhere to be found, the Archangels must scour the Earth for the pieces of God’s Armor in order to prevent them from bringing destruction upon the world the likes of which have only been hinted at through the annals of history!”

In the last few weeks, a comic series of biblical proportions returned to my pullbox. Despite my love for Mad Cave Studios’ Knights of the Golden Sun from day one, part of me worried. It feels so much like we’re living in a modern day apocalypse, I didn’t know how much I’d enjoy diving into a fictional one, no matter how well done. Fantasy reading is often escapism. Lately, my choices have skewed more towards the optimistic graphic novels, such as: Star Trek, Green Lantern, Bill & Ted and Back to the Future. All titles featuring classic good vs. evil elements, but there’s never a question that good will prevail and light will shine over darkness by the time I’ve turned the last page. When KotGS returned for issues 8 and 9, I went in unsure of what would happen, because even though the Bible’s been written (and rewritten), you never know where writer Mark London is going to go next.

Let me be clear, this story is not a Bible retelling– it’s a biblical re-imagining. You’ll recognize names, faces and places from scriptural canon and apocrypha, but leave your preconceived notions at the altar. This is a side of the Bible you’ve never seen before.

London’s deep dive into the scriptures and related writings for story elements is obvious. It’s akin to taking a bucket of your favorite action figures, mixing and matching and creating a whole new adventure from existing ideas. London does this masterfully with many biblical references in issues 8 and 9 with even more to come. The angels are back in these issues, with many of the traditional angel norms reimagined with some gender swaps (looking at you, Gabriel!) and rearranging of certain events. Returning for issues 8 and 9, he doesn’t limit himself to just biblical mythos either, elements of Greek mythology really thunder onto the pages this run!

The KotGS main storyline takes place after the Old Testament but before the New, in a period of several centuries where the scriptures indicate God the Father was ‘silent’. Personally, I think he was off making other universes under a different name in a different city so he could avoid making support payments to ours. It’s not like they had social media to track him back then, right?

God’s throne is empty and the angels are doing their best to run the show on Earth. But things are coming apart at the seams. The mythology buff within me nerded out with references to Noah’s Ark, the City of Zion, the Line of Goliath and more. One instance of reimagining biblical canon I enjoy are the giants/ogres. In issue 9, Metatron and the Ogre King are plotting the destruction of humanity, a favorite pastime of the Giants. Giants are referenced in the Bible prior to the flood in Genesis 6, early in the history of mankind. Very little in the Bible is actually said of them, but one verse reads: “The Nephilim were in the earth in those days, and also after that, when the sons of God came in unto the daughters of men, and they bore children to them; the same were the mighty men that were of old, the men of renown.” (Gen 6:4) To me, the verse seems to acknowledge stories of demi-gods in popular contemporary faiths. Religion has always been a cafeteria plan; different faiths mix their teachings and acolytes often choose their favorite servings from each. In KotGS, London has largely done the same thing with his take on mythology. The giants appeared in the first five issues and their line continues at a point long after Genesis and the flood. One of the Ogre lords is referenced as being from the line of Goliath. Of course, Goliath was the Philistines’ greatest warrior, killed by David in their battle in I Samuel 17. Goliath was referred to as a giant in scripture, but was this literal or hyperbole to describe a mighty warrior of the age? I’m glad London took it literally, seemingly making Goliath the progenitor of the modern line of giants and ogres in his timeline. Of course, that begs the question of how the giants survived the flood? We know there was a flood apocalypse, as the Ark’s resting place makes a prominent appearance in the new issues. (Hey, did someone move it from Mt. Arart? Gen 8:4) If the Nephilim somehow survived the flood (maybe they stood on each other’s shoulders until they were above the water level) to pass their seed down to Goliath, what other sort of divine beings may be hiding out on Earth?

Speaking of apocalypses, one of my favorite aspects of London’s script is jumping the gun on the Tribulation. The final book of the New Testament, Revelation, tells of the Seven Seals of God. They secured the scroll that John of Patmos saw while on an island during an apocalyptic vision. Rev Ch 5-8 details the opening of the seals bringing on the Apocalypse/Revelation. The purpose of opening the seals is to mark the beginning of the Second Coming of Christ, but (AWESOME surprise) London places these seals prior to Jesus’ first coming. The seals are not only already on the scene, but those in the story in the know about them are terrified by the prospect of their opening. Their breaking will herald judgements and many cataclysmic events.

Thanks to a series of fictional books I won’t name, most of modern Christian eschatology studies relate the seven seal judgements to events which haven’t taken place yet. This futurist view of the apocalypse means the seven seals have yet to be opened even now in 2021 (despite all appearances to the contrary). However, the book of Revelation is loaded with so much symbolism and allegory, it’s really impossible to say for sure what any of it means. What if the seals are cracked open early? Especially by a character with ill intent. I can’t wait to find out.

Fair to say, if the seals are opened by evil then our heroes will need something strong to stand against them. Perhaps that will take the form of the Armour of God, the seven story Maguffins the angels search for. In relating the story of the armour of God, London draws on the verses from Ephesians 6:10-18, relating seven pieces as a metaphor for the spiritual warfare Christians face in their daily struggles against the Devil. The full armor of God comprises the Belt of Truth, the Breastplate of Righteousness, the Gospel of Peace, the Shield of Faith, the Helmet of Salvation, and the Sword of the Spirit. One of the items is located in the first two issues. Where will the rest come from? Who will be the first to wear them all at once? Will they be sufficient to stall the seven seals if they are broken? These are just some of the questions I’m asking two issues in. I have a feeling there will be many more to come.

Rejoining London on his storytelling outing is the breathtaking art and colours of Mauricio Villarreal. Villarreal’s lines and colours create surreal effects which take one’s mind into a heavenly realm before reading the first line of dialogue. Maybe better than anyone in the business today, he generates an ‘otherworldly’ feeling where it’s easy to get lost in the art like you’re watching a movie. I feel the dimensions, size and strength of all the characters. This is particularly strong in the artwork for the archangels. They tower over most of the other characters with larger proportions indicating their might and power. Despite being physically imposing, they’re flawed and sometimes unsure of themselves. Villarreal portrays their ethos and pathos through facial expressions which sometimes make London’s prose superfluous (Sorry, Mark!). For a future one-shot or short story of KotGS, I’d love to see a completely silent issue with Villarreal guiding the action, perhaps in a realm or sacred place where speech is taboo and the characters must work in silence to accomplish their goals.

Of course, that story would deny us the excellent work of veteran letter, Justin Birch. KotGS carries a fair amount of dialogue and Birch carries the unenviable, often thankless, task of working it all into the panels in a way that is easy to read, pleasing to the eye and doesn’t cover up Villarreal’s artwork. Birch accomplishes all of these in his usual fashion, while creating some unique balloon work and styles for certain characters. I especially like the stylized colours and balloons for Metatron. In these return issues, he resembles a Kirkman-esque walking sack of meat, but comes off even more foreboding with Birch’s balloons. 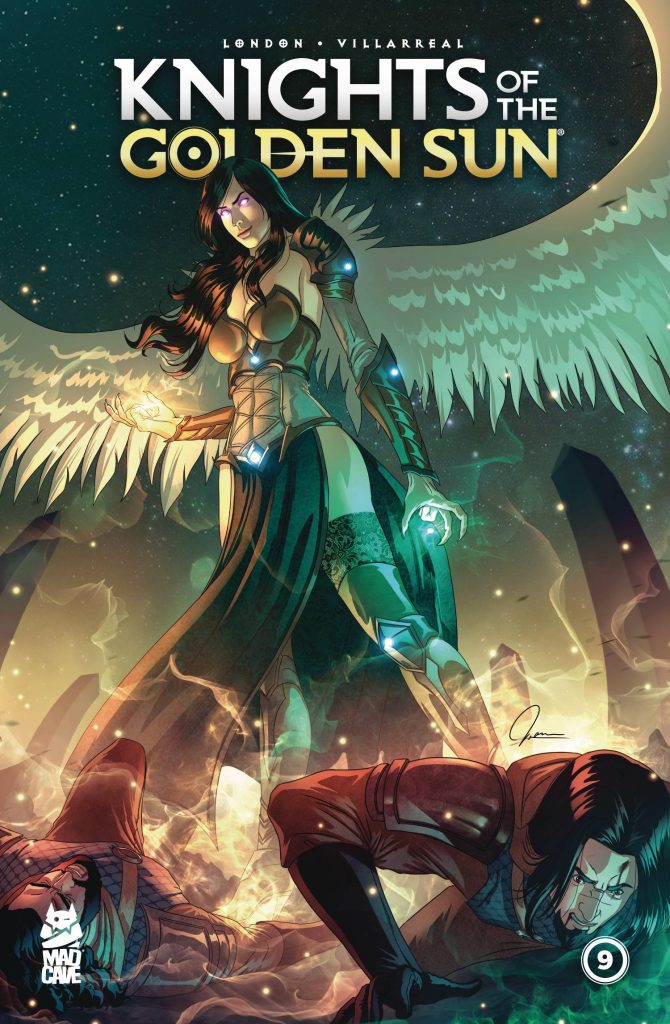 If you’re looking for a buffet of your favorite mythologies on a biblical scale, I can’t recommend KotGS enough: 10/10 Gold Stars of Apocalyptic Destruction!