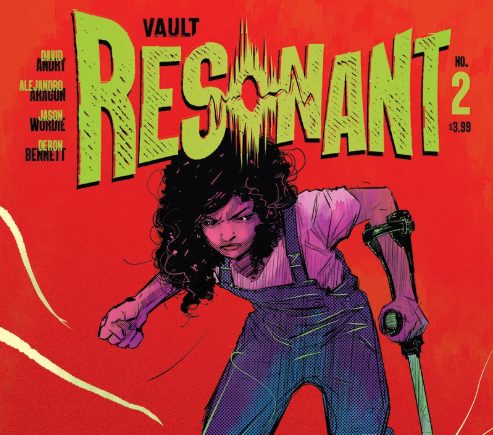 Cabins in the woods are good for a variety of purposes. Apart from being the ideal place for recitations from the Necronomicon, they provide a respite from the aggressions and doldrums of workaday life, a place to disconnect from technology, reconnect with nature, as well as the ideal rendezvous points for unsuspecting coeds and hatchet wielding serial murderers. As DB Andry’s excellent series, Resonant, also shows us, they make an ideal place to reestablish family dynamics in the wake of ambiguous apocalypse. Last month’s debut issue (see my previous review for details) ended at the crescendo of a “wave” sweeping over our characters and story concerns. It was a perfectly executed “cliffhanger” moment, top to bottom. Andry’s story pacing led perfectly up to and into the final moment, which carried over perfectly by the one-two punch of Ale Aragon’s textural line art and Jason Wordie’s emotionally resonant color palette.

Tonally, this second issue opens up in stark contrast to the rising cataclysm of the first book. The wave has ended, but it feels like the aftermath of an emergency event in a packed stadium; there is quiet but for the ringing of alarm sirens in our ears. It’s a perfect pickup to where we left off, creating instant engagement through the power of curiosity. What happened? What was the wave? Is everyone okay?

The Chirper Fiend, as I’ve taken to calling him—that unfortunate soul from issue one who looks kind of like the love child of Iggy Pop and the Mouth of Sauron—is down for the count. Meanwhile, back at the ranch, Bec is excising her brothers from the sealed room where they weathered out the wave last issue. Herself, she’s pretty cut up, which we soon find out is her own doing; an impetus inspired by the wave itself as it washed over her. A bit more of the mystery washes away as we learn that the wave acts at or near a psychic level, seeking and manifesting idle fears such as what it might be like to lose all the skin on one’s arms. Whether that is the entirety of the wave and its underlying motivations, this issue, like the one before it, leaves it for other issues to determine. Andry knows how to mete out story points at a rate and pace that leaves readers clawing at their arms for more. The further introduction of a traveling companion for the errant father figure ups the emotional stakes two fold for any dog lovers who might have picked this one up. It makes for a very engaging story device as it gives a lone character someone to talk to, and a way for exposition to slowly unfurl through dialog rather than straight third person narration, which this series has eschewed entirely. Instead, Andry has entrusted the finer points of the storytelling into carefully selected shots which are crafted with equal care by Aragon in another knockout performance of pen and ink pugilism. While even the most cursory of glances is enough to establish Resonant’s self awareness as a comic book, there is an action and a verve to Aragon’s line work that conveys a sense of life and vitality much deeper than the two dimensional surface upon which it is etched. And those colors? Let it not be said that Jason Wordie doesn’t know his way around the human psyche when it comes to evocative color ranges. Those urgent reds and rich, saturated blues are a constant tug-of-war of aggression and passivity that ring as true as the characters they describe.

I think it’s safe to say, now that Resonant has had time to establish a two issue foothold on the market, that Vault is again doing what Vault does best, and that is introducing new and compelling content without the frills and pretensions of the larger publishing houses. While DC whiles away this Year Of The Villain and Marvel segues from its War Of The Realms bankruptcy-inducing-label-wide crossover into Absolute Carnage (to say nothing of the impending second mortgage that is House/Powers of X) it’s nice to see a publisher that knows how the best comic book stories are still told, and that is: One. Issue. At. A. Time. Arguably and rather obviously, they’re not alone in this game, but Vault comes out swinging for the fences and seldom misses. With more long term series like Wasted Space joining ranks with newer smash hits like Friendo and These Savage Shores, it’s exciting to see them come into their own where it matters most, on the comic book store shelf. Resonant is one I will continue to watch with interest. Doubling back on that opening sentence of mine, I had the delightful and immersive experience of getting to read issue 2 in a cabin out in the remote Eastern Sierras of Northern-ish California. I could not have asked for a better backdrop nor a better story. Finishing issue one, I was hungry for issue two, which now having had leaves me ravenous for the third chapter in this unfolding story of waves, wonders and worlds gone past the point of no return. There will be no waiting for the trade on this one, my friends, I’m hooked.

10/10 For Going Past the Point of No-Return (In Purchasing!)